When I was a kid, wonder was everywhere.

We often talk about the curiosity of children, as if its something we grow out of. But is that a strictly natural progression? Or is it something that’s also trained out of us? We learn to laugh at naivete, to play it cool and find it unfashionable to show genuine amazement at things that are new to us or that we don’t yet understand. Maybe because wonder is connected in our minds with ignorance: the ancient man who stands amazed at the eruption of the volcano, so awed by its power and destruction that he names it after his god of fire, must not know that it is simply a naturally-occurring rupture of the earth from its movement of tectonic plates, in which hot lava is able to escape from its magma chamber below the surface.

Which is ridiculous, because that “natural process” is in itself, amazing. 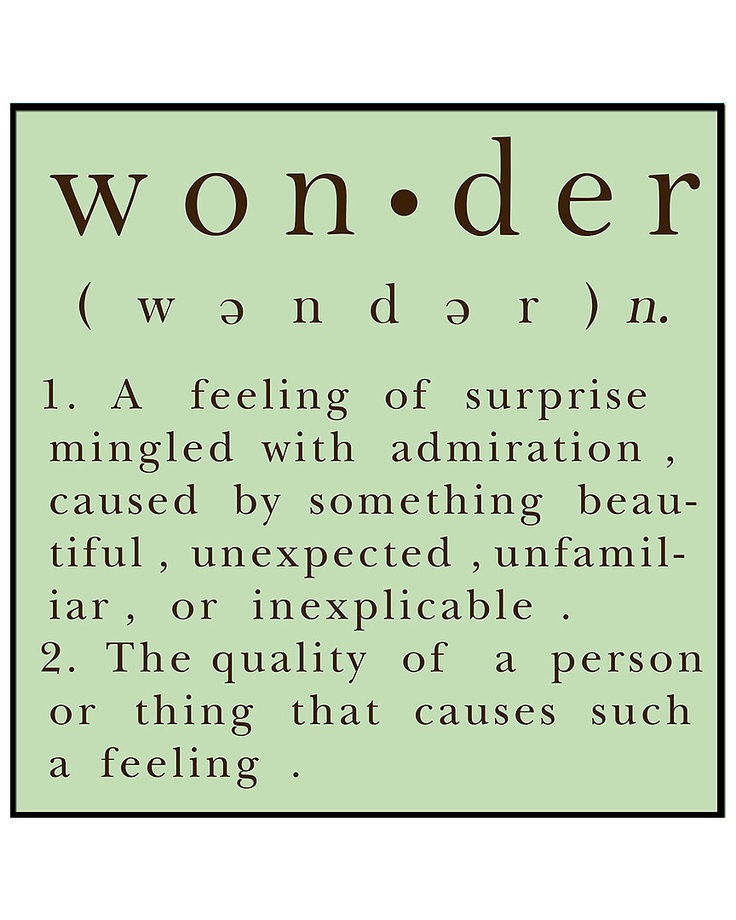 In the Christian life, I think we should feel wonder. Looking around at this world that God has created: it is good. For all its problems, it’s an incredible place with creatures like the mantis shrimp which, among it’s other fascinating features, can move so quickly that the water around it boils. But are lightning bugs, with their ability to emit light, any less amazing? Yet we’re so used to them–or the idea of them–that they fade into the everyday mundaneness of everything else.  It’s not amazing: it’s just science. As knowing how something works makes the fact that it does work any less incredible! And too often we embrace that sort of cynicism in all aspects of our lives, even down to the type of entertainment we consume, and especially how we view humans and humanity themselves.

But often, the media that surrounds tricks us into thinking that innocence and joy are things that we grow out of too, things that are immature and cheesy. We have to have violence and swearing and sex in our fiction and films, because without it they are unrealistic and–what I’ve even heard it said–shallow. But is it really realistic to show only the darker, dirtier sides of life? Even shows and movies that are relatively tame in regards to content often lack the enthusiastic optimism that a person like myself needs sometimes. I know that when it comes to television and movies, I’m usually in the sci-fi and thriller camp. I like things that make me think, that twist my mind and maybe even creep me out a little bit. That’s not cynicism- after all, it takes a specific kind of lack of it to accept some of the more imaginative science fiction out there- but generally I like more “serious” movies, ones with murder and mayhem and political conspiracy. And I don’t think there’s anything wrong with that…so long as it’s not all the art intake that I consume.

It’s too easy to fall into the trap of being a dull, pessimistic person. I’ve been reviewing books since I was about sixteen years old, and as time has passed, it’s become increasingly difficult for me to turn off my “critic” brain. I think we should think about what we watch and read, but sometimes we can go too far, picking to pieces every little thing about every little thing. Sometimes I wish I could go back to being that five year old who liked watching The Swan Princess over and over again simply because I liked it, without analyzing every moment.

Maybe that’s why I loved The Greatest Showman so much. For the duration of the movie, my critic brain was dormant. For the first time in a long time, I simply enjoyed a movie, without finding plot holes or assessing if the character development was realistic. While I was watching, it didn’t even cross my mind to think about those things, because I was simply there.

While there have been many complaints about the historical accuracy of the film, for me it’s almost a non-sequiter: everything about the movie screams fantasy, not historical fiction. And for a story following a man who sells the “fake” to create a spectacle for other’s enjoyment, it’s strangely fitting. As we watch the movie, just like Barnum’s audience, we’re lost in the wonder and amazement of the strange and the beautiful, the two often being one and the same. The movie is unabashedly enthusiastic- something I don’t see often on the big screen. Films have a way to amaze us visually that is almost impossible to re-create in any other format. Filmmakers have the ability to dazzle us with color, music, dancing, and cinematic magic tricks and when they do it right, the result is mesmerizing.

The last movie that made me feel this way was Cinderella (2015). Cinderella was beautiful. There was a sweetness and a purity of character in that movie that drained all the cynicism I was holding inside right out. Were parts of it a bit cheesy, maybe even too syrupy sweet? Perhaps. But I didn’t care, because I was that little girl again. It was refreshing to watch a movie about two good-hearted people who gain happiness and extend forgiveness, even if it meant defying our own culture’s expectation of what it is to be “strong.” And while this isn’t a post to convince you that these movies are flawless pieces of art (because they do have their flaws, indeed) it is a post celebrating those pieces of art, literature, and film that recapture a sense of childlike wonder in us. The movies that act like Giselle pulling Robert into a full-on musical number in the middle of New York. The movies that celebrate the best in us, the created-in-the-image-of-God part of us that is capable of courage and kindness, of a joy that makes us dance in the streets, and of a love that brings us back to our family.

If we are created in the image of God, and God has created such wonderful things, isn’t there something inside of us that yearns to create beauty–to see beauty–as well? Sometimes we need a little bit of that wonderment in our lives, and I’m thankful for the people who manage to bring it to us in little ways. That’s just a bit of my rambling and realizing that, however much I may love a meaty, philosophically-driven film, sometimes, I just want to see something beautiful, with loads of heart and goodness.

What are some of your favorite wonder-filled films?

17 thoughts on “On Wonder In Film”